For those of us that use a car garage as a workshop, warmth is important over the winter months. Cold machines like to break, and cold oil does not like to lubricate things. I am also slow to start on cold days so I want a workshop that remains a little warm over winter without costing the earth.

I have insulated the garage already, but have had issues with closing gaps between the garage doors and the wall. This renders all the insulation redundant since the heat can just seep out. I had initially closed the gaps between the roller doors and garage with rubber strips. These were strips used under doors to block drafts. They worked OK but the problem has been they catch and then tear. 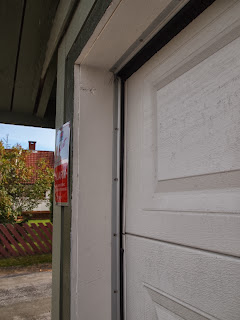 As you can see from the picture, I have a brush at the top to seal the gap, but the rubber has been catching in the door and causing it to stop. It has also damaged the rubber and torn big chunks out. The solution has been to install brushes instead. They don't catch, they stay flexible and are quite effective at sealing in the heat. I couldn't get the largest size as they only had 2 so I went with large brushes up top, and shorter on the bottom half: 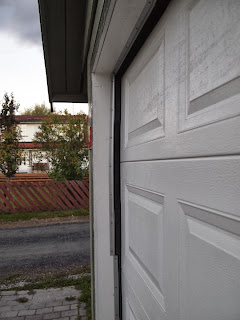 It looks a little odd and I will probably change this later. On the other door the gap was smaller so I could use the smaller size which was fortunate as I only had 2 large brushes. 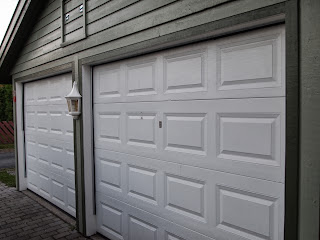 This is a cheap solution to sealing garage door gaps. If you try it, close the door before you install them and just push the brush up flush with the door. Don't force the brushes too hard against the door though as this will cause increased resistance which will cause the door to automatically stop. The brushes are flexible which means that when you fasten the first 2 screws, you can bend it to the shape of the garage door.

So there you have it, to seal gaps between garage doors and the door frame, you can use door brushes. Like Ned Stark said, "Winter is coming!"

Email ThisBlogThis!Share to TwitterShare to FacebookShare to Pinterest
Labels: Garage

The axeman
I am an Australian expat living in Hvittingfoss, Norway. I have had an interest in things involving outdoor and self-sufficient living most of my life. I enjoy working with my hands and keeping old fashioned skills alive.

Sites and blogs worth checking out

All articles and guest posts on this blog are subject to copyright. Do not reproduce or distrubute text or pictures belonging to this blog without first contacting the blog owner for permission.